I've been DJ'ing at swing and blues dances for a while now. It's extremely fun and rewarding. I've got a system that I use to keep myself sane while doing it and I felt like sharing. Let me know what you think!

When I was just starting to get really interested in dancing I didn't think I'd want to DJ much. I thought it would be a lot of work and that I'd hate having to stay near a computer during a dance. It just didn't seem like very much fun.

The only reason I began to try my hand at it was because we needed to have good music to play at RIT Swing Dance Club when my old roommates and I started teaching there. I wanted the other people to have a good time and hear the awesome music that we love dancing to. I figured that it didn't need to be a big deal; I'd just find some cool music and play it at club.

Once I started, I realized that I really like being able to play great music for other people to dance to. It sounds cliche, but it really is rewarding. There's something special about having a kind of control over an entire dance floor.

After I became comfortable DJ'ing at club it was only a matter of time before I started signing up to DJ at Lindy Jam and then playing music at our little blues parties. I love it. DJ'ing is good for me — it forces me to look for interesting new music and really listen to it to hear how it works. Really listening (without dancing) closely to swing or blues music is something that I don't think enough dancers do.

Where Do I Find Music?

Most of the music I play comes from eMusic. It's a great site — you pay $15 and get about 40 tracks per month. That's far cheaper than iTunes and it's all DRM-free mp3 files. They have a great collection of jazz and blues (and a lot of indie and classical music too). I highly recommend them if you're looking for some awesome music.

Previously I've wanted nothing to do with iTunes because of the DRM. Thankfully Apple has announced that they've convinced the record labels to allow DRM-free downloads of everything. I'll still get most of my music from eMusic (it's cheaper) but if they don't have a song I want I'll definitely look on iTunes.

As for CDs and vinyl, I do occasionally buy and rip some, but for the most part digital music is simply faster, easier, and cheaper to use.

Over the past couple of years I've turned into a pretty organized person. If I don't have a good method of sorting and organizing my music I'll go crazy when I try to DJ. I've developed a way of organizing everything over the years I've been DJ'ing which seems to work pretty well for me.

The first thing I do when I download a new CD from eMusic is skim each track and decide if it's even remotely danceable. If it's got a beat I can dance to at all, it goes into my "Lindy & Blues" playlist in iTunes. I don't worry about how good the song is — the important part for me is getting the decent songs into that playlist so I don't forget about them.

My next step is tagging danceable songs with BPM (beats per minute) information. This is really nice to know when you're out at a dane and thinking: "I should play a song that's a bit faster than that last one."

I've experimented with a couple of different methods in the past but they all seemed pretty cumbersome. The solution came in the form of this Tempo Widget for my Mac's dashboard. Click the button on each beat, double click the numbers to save the BPM to the currently playing iTunes song.

That's nice, but it's not enough for a nerd like me. The mouse is so slow; what I really needed was a way to use the keyboard for everything so I could fly through tagging my songs in less than 15 seconds each. I opened up the code for the widget and added a couple things. I can press any key on a beat instead of clicking the button, and I can hit Cmd+S to save the BPM to the iTunes song instead of double clicking the numbers.

I also use Quicksilver to add keyboard shortcuts to move to the next/previous song in iTunes. Now that I've got all that done, when I want to tag a bunch of new songs with BPMs I can do this:

It usually takes me 15 seconds or less per song and saves me a ton of time (I have about 900 songs tagged with BPMs right now!). If you're interested in my modified version of the Tempo Widget let me know.

Let's face it: some songs are better than others. Some songs are fun to dance to, but others almost force you out of your seat. I like to be able to glance at my playlist and have a rough idea of which really awesome songs I've got at a specific tempo.

Some people might say: "You should know all of your music by heart and shouldn't need to rely on ratings." I disagree — maybe I'm just not as diligent in studying but there's no way I could remember every single song in my playlist. Of course you should know your music, but that doesn't mean you can't use whatever tools you like to make your DJ'ing even more effective. Ratings help me remember to play a song that I might otherwise have forgotten about and let me see what my options are if I really need a fantastic song right now.

Unfortunately I didn't start rating my danceable songs until a month or two ago and so I'm only about halfway through. One thing that helps is iTunes' Smart Playlists. I can create a smart playlist that only shows me songs that are in my "Lindy & Blues" playlist but aren't yet rated. 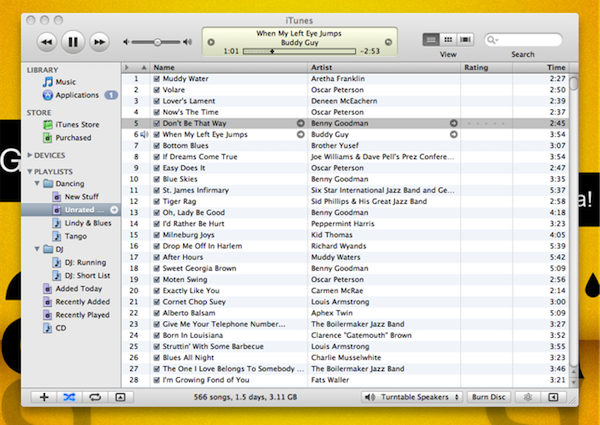 I have an iPod as well, so when I'm out and listening to my music I can set the rating right on the iPod. When I get back to my computer I plug in the iPod and it syncs the ratings back to iTunes for me.

All of the steps I've talked about so far have one goal: to make playing great music at an actual dance easier.

I rarely preview songs before I play them; I know my collection pretty well and usually have a good idea whether or not a song will fit. Still, it's definitely nice to be able to hear a song now and then.

Some DJ's really love external sound cards which let you have two music players open on your machine; one plays the music going to the room speakers and the other plays into a set of headphones. I don't use this setup for a few reasons:

What do I do instead? I use my iPod. Sure, the interface isn't as easy to navigate as a music player on a laptop, but it doesn't cost any extra money (I have it anyway) and there's no chance of accidentally messing up the currently playing song.

Throughout the night as I decide which songs I want to play I put them in two separate lists. First they go into my "Short List" which is usually around five to ten songs that I think I'll want to play fairly soon. That gives me easy access to songs I'll probably play soon.

The "Running" playlist is the one that's actually playing through the speakers. I usually have one or two songs queued up ahead of time in case I get distracted from my laptop for a bit.

Sorting on the Fly

All the work I put into tagging and rating my music pays off when I'm actually trying to decide what to play next. When I'm looking through my collection my iTunes window will usually look like this (except for being slightly bigger and having the sidebar showing): 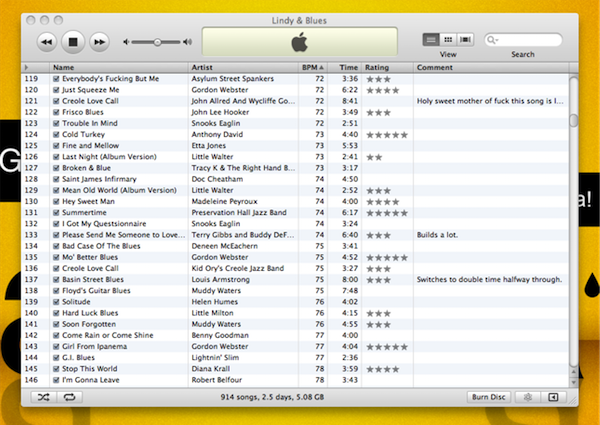 I can use the search bar in the upper right if I'm looking for something specific. I can sort by BPM if I know I want a song at a rough tempo. The ratings draw my eyes to the songs that I love the most. The comments are there to remind me about songs that have long intro/outros, double timed sections, etc. Having all of that at my fingers makes it much easier for me to find exactly what I want and get it to the speakers.

I wrote this because I wanted to share how and why I DJ for dancers. If you're a DJ, I hope I've given you a couple of ideas for new tricks to make your job easier. Let me know what you think on Twitter!

If you don't DJ but think you might want to, great! Please don't be scared off by my absurdly organized workflow — just because it works for me doesn't mean you have to do it. Find some good music and sign up to DJ at Lindy Jam! If you think two hours is too long for you as when you're first learning to DJ just ask myself, Matt, Jesse, Mike or Beth if we'll share the night half & half with you. If you have any questions please let me know!