I've been spending a lot of time in the Terminal lately. I use bash, and it lets you configure the prompt pretty much however you want. I won't go into how to do the most basic configuration here - if you want to get up to speed check out this guide.

In this post I'm just going to talk about one simple addition that I personally find very helpful: displaying the current branch of a Mercurial repository.

I swear, this is the last time I'm updating this entry. I went ahead and made an extension for Mercurial called hg-prompt that does everything much more elegantly. Use that instead!

Here's what my prompt looked like a couple of days ago: 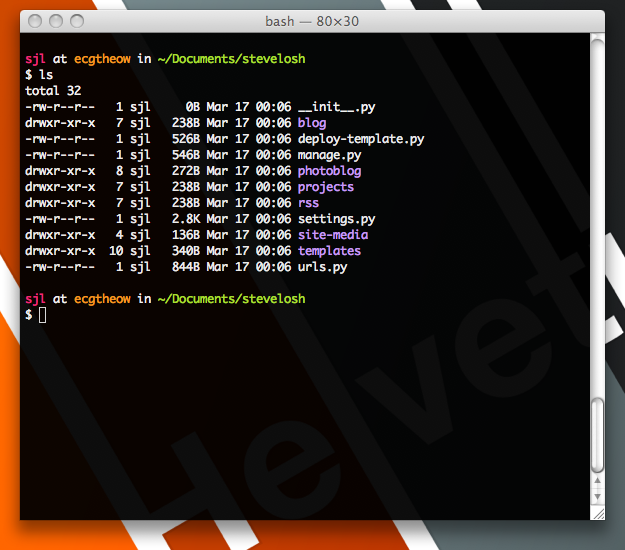 Here's the code in my .bashrc file to create it. I've stripped out the color information to save space.

I use the same prompt on every computer I work with, so with this prompt I can see which user I'm logged in as, which machine I'm on, and where in the filesystem I am. It's a lot of useful information at a glance but doesn't seem too cluttered.

I have a linebreak in there because the filesystem path can get pretty long. If I kept it all on one line most of my commands would be wrapped around anyway, which I find harder to read.

I use Mercurial for version control, and I use branches quite a bit when I'm developing. One problem with this is that it's easy to forget which branch I'm on at a given moment. I could just use hg branch to find out, but that gets tedious to type, even when aliased to something like hb.

A few days ago I got the idea that I could just display the current branch on my prompt whenever I'm in a directory that's part of a repository. Here's what my prompt looks like now: 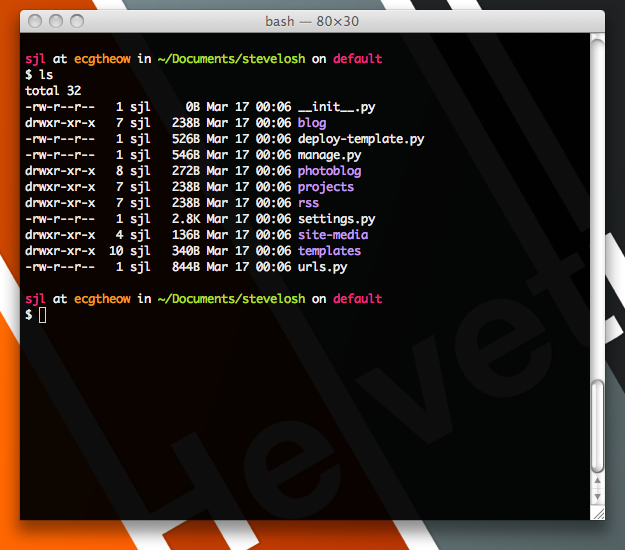 And here's the code in my .bashrc that does it:

The on branchname piece is only displayed when you're in a directory that's part of a Mercurial repository.

I've split it up into two separate functions because I wanted to have on and branchname displayed in two different colors. I couldn't seem to include the color codes in the awk command, so I split it up and put the colors in the export statement with the rest of them. If you don't care about colors (or don't mind having both words the same color) you can just collapse it into one function.

Updated: Is It Dirty?

After I posted this entry Matt Kemp commented with a link to a git version. One feature that version has is a simple indicator of whether or not the repository you're in is dirty. I ported it to Mercurial and here's the result: 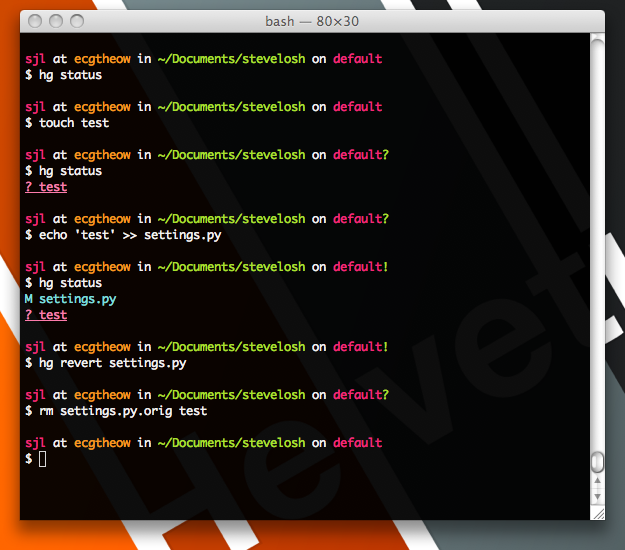 And the code in .bashrc:

I've added another piece to show bookmarks as well. I've also figured out how to add colors directly in the functions, so here's the (much nicer) updated code all at once:

These are some pretty simple changes but they help keep me sane. One thing to be aware of: if you use all of these it does slow down the rendering of the prompt by a tiny, but noticeable, amount. I'm not the strongest bash scripter, so if there's a better way to do this (or a way that will make it faster and reduce the delay) please let me know!

UPDATE: Matt Kemp posted a link to a git version of this below. If you use git, check it out! One thing that version has that I didn't think of is an indicator of whether the repository is dirty (has uncommitted changes). I'm going to go ahead and steal that idea for my prompt too.

UPDATE: By request, I've written an entry about the colors.

UPDATE: Kevin Bullock pointed out that the Python interpreter needed to be started a bunch of times which will degrade performance. I've changed up the "dirty" code a bit to reduce the number of interpreters needed. It's still not as efficient as his version, but I think it's about as good as I'm going to get if I want separate colors for the pieces and don't want to rely on an external script.

FINAL UPDATE: I made an extension for Mercurial called hg-prompt that does everything much more elegantly. Use that instead!