The Real Difference Between Mercurial and Git

There are a lot of other blog posts and web sites comparing Mercurial and git.

Some of them are just plain outdated or wrong (whygitisbetterthanx.com for example, lists "cheap local branching" as a git advantage over Mercurial, when Mercurial actually has cheaper branching than git!).

Even the ones that aren't factually incorrect often seem to focus on features and speed. While this may have been relevant in the past, both systems have borrowed so much from each other that I don't think it's a very big deal today.

This post is about what I feel are the last, most important differences between git and Mercurial.

This might sound trivial, but I don't think it is. How a system "feels" matters. Version control is something you use constantly, so it's important to find a system that fits your way of thinking.

I'm a visual learner, so I find it helpful to make visual analogies when I'm trying to explain something. Here's how I visualize the difference between Mercurial and git: 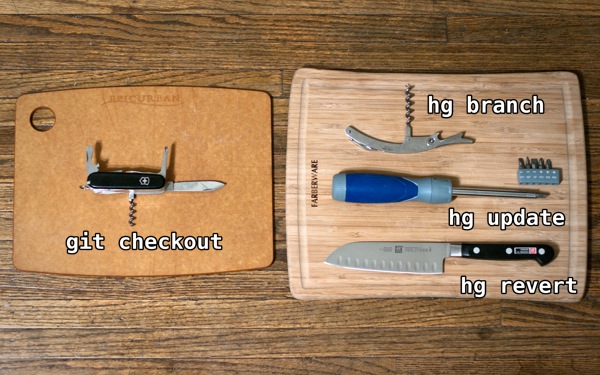 Each git command is like a Swiss Army knife. For example, git checkout can switch the working directory to a new branch, update file contents to that of a previous revision, and even create a new branch. It's an efficient way to work once you learn all the arguments and how they interact with each other.

Mercurial is like a well-equipped kitchen — it has a lot of tools that each do one simple, well-defined thing, and do it well. To switch the working directory you use hg update. To update file contents to what they were at a previous revision you use hg revert. To create a new branch you use hg branch. This means there are more commands to learn, but each command is much simpler and more specific to a single conceptual task.

I personally find Mercurial's philosophy easier to work with. It's easy for me to wrap my head around commands when they're more modular and less monolithic.

For example, I find Mercurial's help entries easier to understand. This might just be because git's help entries are simply too long to read and digest when I'm in the middle of coding:

I realize that not everyone feels the same way as I do. If you like git's way of thinking better, you should certainly use it.

Aside from their "feels" I see two other big differences that still remain between git and Mercurial.

A major difference between the two systems is their most popular hosting sites: BitBucket and GitHub. GitHub is leaps and bounds above BitBucket in pretty much any aspect you look at: graphic design, popularity, speed, and/or features. Every time I've seriously considered moving to git it was purely because of this disparity.

I don't like using git itself (though it's far better than SVN or CVS), but GitHub is such an awesome site that I've considered switching just to use it. You can chalk it up to "popularity" (i.e. git has more users, so GitHub is more profitable and so has more money to spend on development), but the fact is that GitHub is still far better than BitBucket.

One of the features that git users talk about often is git's index. Mercurial has the record extension, but it's not really the same thing.

I personally don't like the index. I feel that git encourages people to check in changesets that contain code which they've never tested (or even built) because the index is such a prominent part of git's workflow.

Yes, one can argue that you don't actually push changes until you've got a working state. The problem is that when you then try to run git bisect later to find a bug you'll have to waste time skipping over changesets that don't build. You could use git rebase --interactive to fold partial changesets into one big one, but again, my gut feeling is that few people actually bother testing the results.

With all that said, I've considered creating a Mercurial extension that adds git's index functionality to Mercurial, because I think it would make the transition to Mercurial easier for git users. I've had enough experience with Mercurial's internals to know that such a thing is possible, but I simply don't have the time to do it all myself. If you're interested in helping out please let me know!