This entry is the second in my series describing various Mercurial workflows. The first describes the simplest one: branching only when necessary.

If you're working on a larger project you might want something with a bit more structure. This post is about the "stable and default" workflow.

"Stable and Default" in a Nutshell

The general idea of this workflow is that you keep two branches: default and stable.

Each time you make a bug fix in stable you merge it into default, so default is always a superset of stable.

Periodically (whenever you're ready for a "major release") you'll merge default into stable so new features can be included in releases.

Mercurial itself uses this workflow for development, so it can scale well to projects of moderate to large size.

To get started using this workflow you'll need to create a stable named branch:

Once you do this users of your project can clone the stable branch and be confident that they're getting a relatively stable version of your code. To clone a branch like this they would do something like:

This will clone your project's repository and include only changesets on the stable branch (and any of their ancestors).

The goal of this workflow is to do all non-bugfix development on the default branch. Pure bug fixes should go on the stable branch so stable stays as, well, "stable" as possible.

Users that want to live on the bleeding edge of development can use the default branch of your project. Hopefully your project has some users that are willing to work with default and inform you of bugs found with the new functionality you add to it.

Whenever you make a change to stable you'll want to merge it into default so that default always remains a superset of stable. This makes default as stable as it can possibly be. It also makes it easier to merge default back into stable whenever you're ready for a major release.

Here's an example of how your repository's graph will end up looking: 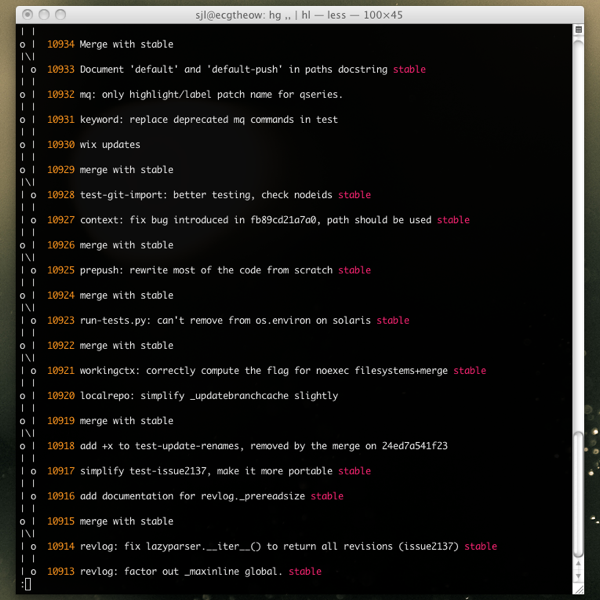 Notice how each time some changes are made on stable they're merged to default.

Because your project has more stable users than bleeding-edge users, you'll probably get more bug reports than usual after you release a major version. This is to be expected and you should be ready for it.

Any decent project should tag releases. This lets users easily use a version of your project that they know works.

Wondering how to decide when to tag releases, and what to use for the tags? The semantic versioning specification is a great guide that makes it easy for your users to know (in a broad sense) what each release changes.

In a nutshell, tags in a semantically versioned project work like this:

Unfortunately this workflow makes it a bit more complicated to add semantic versioning tags to your project. The rules for semantic tagging would work like this:

The problem with this is that default never has any version tags. However, this probably isn't a big deal because users of default are those that want to live on the bleeding edge of your project and aren't as concerned with stability.

In the workflow I've described there are two branches: default and stable. You might be wondering why default is used for new development and the "stable" branch is relegated to a named branch.

The reason is that default will typically have many, many more changesets added to it than stable, and so making the "development" branch the default makes it easier on the developers.

There is absolutely nothing wrong with making default the "stable" branch and creating a dev branch for "unstable" changes. If your project rarely adds new functionality but is more concerned with fixing bugs this version of the workflow will obviously be better for you.

This version also has the added advantage of giving users that naively clone your project (without a branch specified) the stable version. Since many users don't bother to read instructions even when you provide them, there is a strong argument for using it even when your project is not overly concerned with bug fixes.

It's up to you to decide which version you want to use.