I've been using Mercurial Queues more and more lately. At the last Mercurial sprint Brendan Cully said something that made me realize that MQ behaves very much like a souped-up version of git's index.

I wanted to write a blog post about the similarities between the two concepts so that git users could understand Mercurial's MQ extension a bit better and see how it can take that concept even further than git does.

This post is not intended to be a guide to MQ's day-to-day commands — it's simply trying to explain MQ in a way that git users might find more understandable. For a primer on MQ commands you can check out the MQ chapter in the hg book.

Let's take a few moments to review how git works so we're all on the same page with our terminology.

When you're working with a git repository you have three "layers" to work with: 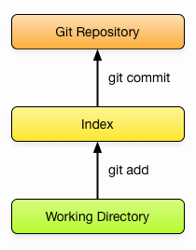 This is a very powerful model because it lets you build your changesets piece-by-piece and commit them permanently only when you're ready.

With basic, stock Mercurial you only have two "layers" to work with:

You use hg commit to shove changes from the working directory into the repository: 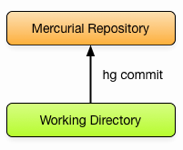 This model doesn't give you as much flexibility in creating changesets as git's does. You can use the record extension to get closer, but it's still not the same.

Let's take a look at MQ to see how it can give us everything git's index does and more.

Using MQ with a Single Patch

The most basic way to use MQ is to create a single patch with hg qnew NAME. You can make changes in your working directory and use hg qrefresh (or hg qrecord) to put them into the patch. Once you're done with your patch and ready for it to become a commit you can run hg qfinish: 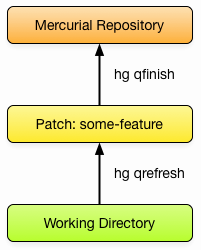 This looks a lot like the diagram of how git works, doesn't it? MQ gives you an "intermediate" area to put changes, similar to how git's index works.

This single "intermediate" area is where git stops. For many workflows it's enough, but if you want more power MQ has you covered.

MQ is called Mercurial Queues for a reason. You can have more than one patch in your queue, which means you can have multiple "intermediate" areas if you need them. 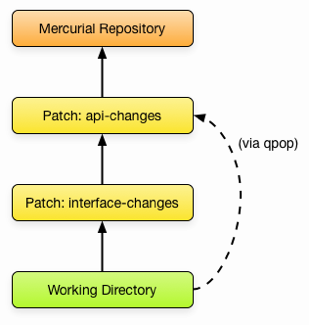 You can move back and forth between these patches with hg qpop and hg qpush. If you're working on the interface and realize you forgot to make a necessary change to the API you can:

Using multiple patches is like having multiple git indexes to store related changes until you're ready to commit them permanently.

What happens when you want to work on two features, each with two patches, at the same time? You could simply create four patches and let the second feature live on top of the first, but there's a better way.

Mercurial 1.6 (I think) added the hg qqueue command, which lets you create multiple patch queues, each one living in its own directory. That means you can create a separate queue (with its own set of patches) with hg qqueue -c NAME for each feature: 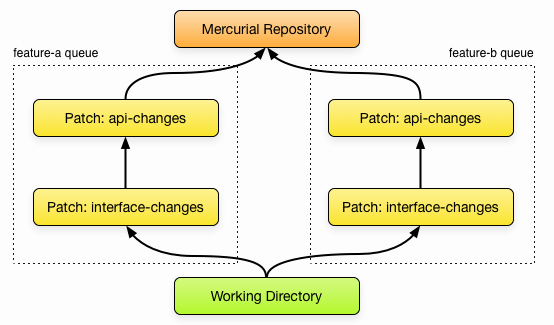 You can switch patch queues with hg qqueue NAME. This gives you multiple sets of "intermediate" areas like git's index to work with. This is probably not something you'll need very often, but it's there when you do need it.

You can see that MQ is already quite a bit more flexible than git's index, but it has one more trick up its sleeve.

Let me prefix this section by saying: "You might think you need to use versioned patch queues, but you probably don't." Versioned queues can be tricky to wrap your head around, but once you understand them you'll realize how powerful they can be.

Let's pause a second to look at how MQ actually stores its patches.

When you create a new patch with hg qnew interface-changes Mercurial will create a patches folder inside the .hg folder of your project. Your new patch is stored in a file inside that folder (along with some other metadata files):

These folders are normal filesystem folders. The patches inside them are plain-text files.

This gives them a very important property:

They can be turned into Mercurial repositories to track changes.

Once you understand what this means, you should have several "oh my god" moments where you realize several very interesting things:

Versioning patch queues means you can end up with a (hard to read) diagram like this: 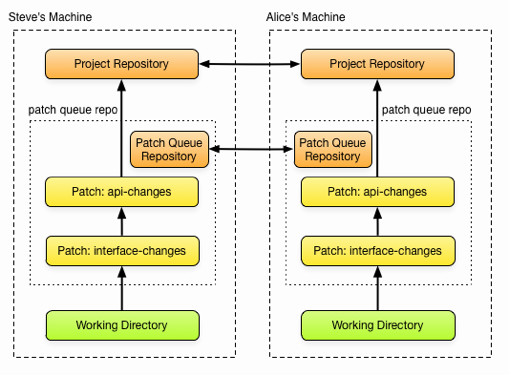 Versioning patch queues is an incredibly powerful concept, and most of the time you won't need it, but it's nice to have it when you do.

It's also nice to know that BitBucket has special support for version patch queues.

Despite how powerful MQ is (or perhaps because of it) it has some problems. Most could be fixed if someone had a week or two to spend on it, but so far no one has stepped up.

I'd do it if I could afford to take a week away from full-time/freelance work, but I can't right now. If you want to be the hero of at least one MQ user (me) here's what sucks about MQ:

In addition there's another MQ-related change that would be very, very nice:

If someone takes the time to fix these problems I'll love them forever. Until then we're stuck with the powerful-but-sometimes-clumsy MQ interface.

Hopefully this post has given git users (and Mercurial users) an idea of how powerful MQ can be. If you have any questions please find me on Twitter and me know!