The Caves of Clojure: Part 3.1

This entry corresponds to post three in Trystan's tutorial.

If you want to follow along, the code for the series is on Bitbucket and on GitHub. Update to the entry-03-1 tag to see the code as it stands after this post.

I'm going to split this up into three separate short posts, so you can see the process I actually went through as I built it. This post will deal with the world generation and basic displaying. The next one will be about smoothing, and the one after that about scrolling around.

First of all, my single core.clj is going to get a bit crowded by the time we're done with this, so it's time to start splitting it apart. I made a world.clj file alongside core.clj. That'll do for now.

First I set up the namespace:

Next I defined a constant for the size of the world. I chose 160 by 50 tiles arbitrarily:

I moved the World record declaration out of core.clj and into this file:

What is a tile? For now it's going to be a simple record:

Tiles are immutable, so let's make a map of some of the ones we'll be needing:

The :bound Tile represents "out of bounds". It will be returned if you try to get a tile outside the bounds of the map. There are other ways to handle that, but this is the one Trystan used so I'm going to use it too.

Next I created a little helper function for retrieving a specific tile:

Remember that we're storing the tiles as a vector of rows, so when we index into it we need to get the y coordinate (i.e.: the row) first, then index in for the column with the x coordinate.

This is a bit ugly, but storing the screen as rows is going to help us later as we draw the screen, and it gives us the opportunity to do bounds checking as well.

The get-in call is a really handy way to check bounds. No worrying about comparing indexes to dimensions — just try to get it and if you fail it must be out of bounds.

That's about it for the world structure. Time to move to the generation:

Nothing too fancy happening here. In random-tiles I built up a series of helper functions to make it easier to read. You could save some LOC by just using anonymous functions instead, but to me this way is easier to read. Personal preference, I guess.

For now we're just going to generate a world where every tile has an equal chance of being a wall or a floor. I might revisit this later if I want to make the caves sparser or denser.

That's it for the world generation. Next we'll move on to actually displaying the new random worlds.

Let's switch back to core.clj. First I updated the namespace to pull in the random-world function:

Before going further I decided to do a bit of cleanup. Instead of hardcoding the 80 by 24 terminal size, I pulled it out into a constant:

I updated clear-screen to use that:

It's still not perfect (what if the user's terminal isn't 80 by 24?) but it's not something I care enough to fix right now. I'll get to it later. At least now the hardcoded numbers are in one spot.

There's a few things I need to do to get the world on the screen. First I created a :play UI similar to Trystan's. I'm not a big fan of the generic-sounding name, but I couldn't come up with anything better in a few minutes of thinking.

Creating a UI requires implementing the draw-ui and process-input multimethods from the previous post. I'll start with the easy one: input processing.

For now the flow of the game will go like this:

With that in mind, I wrote the process-input implementation for :play UIs:

I'm still replacing the entire UI stack at once. I'm going to be throwing that code away later anyway so it's not a big deal.

Now I need to update the :start UI to send the user to the :play UI instead of directly to the :win or :lose UIs.

I also decided that this is where I'd generate the new random world. It makes sense to put that here, because every time you restart the game you should get a different world.

On the other hand, this means that the process-input function is no longer pure for :start UIs (all the other input processing functions are still pure). I'm not sure how I feel about that. For now I'm going to accept it, but I may rethink it in the future.

Now that I have the world generation in there, I can remove the (new World) call from the new-game helper function:

Now new-game does even less than before. It just sets up a game object with the initial UI and nil world/input.

Okay, on to the last piece: drawing the world. This is some pretty dense code, but don't be scared — I'll guide you through it and we'll make it together:

Let's look at this beast line-by-line. First we pull the tile vector out of the game object with Clojure's destructuring:

This seems a bit hard to read to me, so I might move it into the let statement with a get-in call later. Maybe.

Next I bind a bunch of symbols I'll be using:

cols and rows are the dimensions of the screen (hardcoded at 80 by 24 for the moment).

vcols and vrows are the "viewport columns" and "viewport rows". The "viewport" is what I'm calling the part of the screen that's actually showing the world. I'm reserving one row at the bottom of the screen to use for displaying the player's hit points, score, and so on. It would be trivial to increase that to two rows if I need more later.

It's easier to explain with a diagram. Imagine I reduced the size of the world to 10 by 10 and the terminal to 5 by 3, and the user was standing near the middle of the map:

Here V represents the portion of the map the viewport can show (which is what we'll be drawing to the user's terminal). In this example start-x would be 2, start-y would be 3, end-x would be 6, and end-y would be 5.

Okay, so I've calculated the part of the map that needs to be drawn. Now I loop through the rows:

This is a bit obtuse, but basically the map call pairs up the viewport row and map row indices. In our example it would result in this:

So viewport row 1 corresponds to map row 4. There's probably a less "clever" way to do this that I should use instead.

For each row, I grab the tiles we're going to draw and store them in a vector called row-tiles by grabbing the row of tiles from the world and taking a slice of it.

Almost there! Next I loop through each column in the row:

For each column I grab the appropriate tile and figure out what glyph and color to draw (remember the definition of Tile: (defrecord Tile [kind glyph color])).

Finally I can actually draw the tile to the screen at the appropriate place:

Whew! If that seemed painful and fiddly to you, trust me, I agree. I'm open to suggestions on making it easier to read.

Now that the :play UI knows how to draw itself and process its input, and is properly hooked up by the :start UI, it's time to give it a shot! 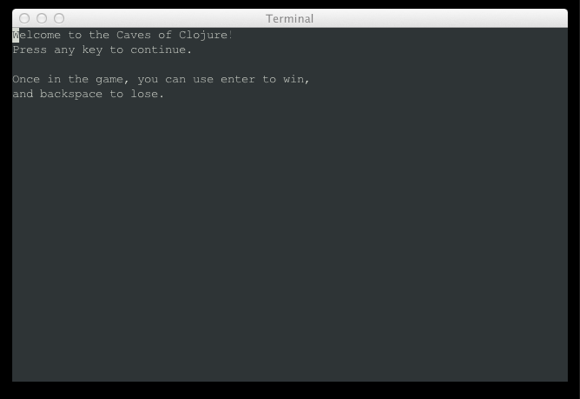 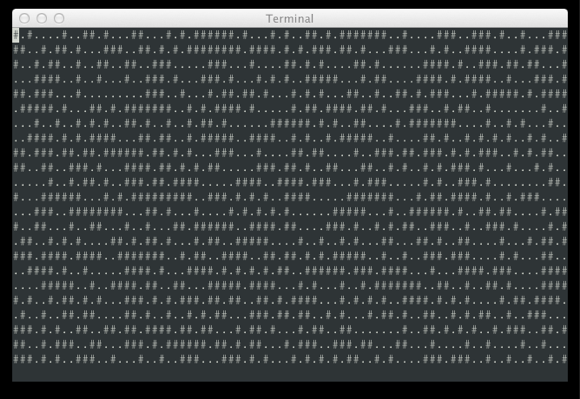 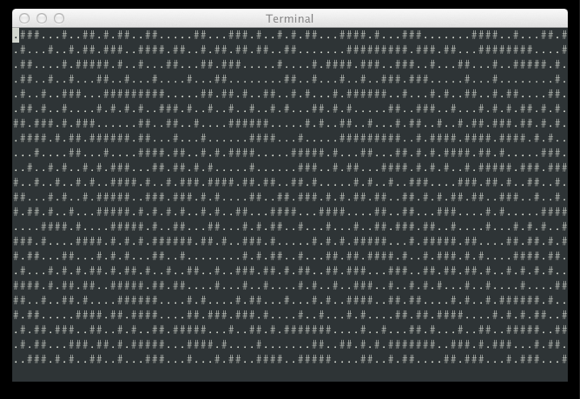 Each time we start we get a different random world. Great!

The code is getting a bit big to include in its entirety, but you can view it on GitHub.

That covers the first part of Trystan's third post. Aside from the painful draw-ui function it was pretty easy to add. In the next post I'll add the smoothing code to make the caves look a bit nicer.