The Caves of Clojure: Part 3.2

This entry corresponds to post three in Trystan's tutorial.

If you want to follow along, the code for the series is on Bitbucket and on GitHub. Update to the entry-03-2 tag to see the code as it stands after this post.

When the last post left off I had a random world generated, but it wasn't very pretty. Every tile had an equal chance of being a wall or a floor, which results in an uninteresting "white noise" of rock. Not a very nice setting for a roguelike.

This post is going to show how I added Trystan's world smoothing to make nicer-looking caves. He uses a cellular automata-based world-smoothing algorithm that I think is really cool, so I'm going to do pretty much the same thing.

Let's jump right in. The world smoothing code is going to go in world.clj.

Before I start writing the actual smoothing code, I added two helper functions to print worlds to the console so I could see what I was doing:

Simple, but very helpful because (:tiles world) contains Tile records instead of just the raw glyphs, so printing it without these helpers makes it impossible to read.

Okay, on to the real code. I'll go through it from the bottom up this time because I think it's easier to understand that way.

First I added a smooth-world function that will be what I eventually need to call repeatedly to smooth out the terrain:

It's pretty much a helper function that handles getting the tile map in and out of the world object. The smoothing process only cares about the tile map, not anything else the world might later contain.

I use Clojure 1.4's new mapv function, which is basically a version of map that creates a vector as the end product instead of a lazy sequence. Our :tiles object is a vector of vectors going in, so it should be the same coming out.

I loop map over the row indices. For each row number I get the result of get-smoothed-row, and the mapv concatenates all of those into a vector for me, so I end up with [[smoothed row], [smoothed row], ...].

You might notice that I'm using an index-based approach here. Isn't that a bad idea in Clojure? Shouldn't I be using sequenced-based things instead?

I spent about twenty minutes trying to get the sequence-based approach in the Programming Clojure book to work and eventually gave up. It sounds like a beautiful idea but I couldn't deal with it for a number of reasons:

Here's an example of a few of the functions from the book I would have been using if I had gone that route:

I personally find it easier to read things like (get-smoothed-row tiles y) than (map vector left right mid). You might feel differently, but this was what I ended up with because I didn't want to spend a ton of time on the smoothing process.

Anyway, back to the code. Now I need a way to smooth a single row:

Once again I use mapv because a row needs to be a vector. This time I'm mapping over the column indices, but for the most part it's very similar to the previous function.

I need a function to smooth a tile, but first I need a way to get a "block" of tiles.

The basic rule I'm using for the smoothing comes from the page about cellular automata smoothing on RogueBasin:

A tile will become a floor tile if and only if the 3 by 3 square of tiles centered on it contains 5 or more floor tiles.

This means I need a way to get the 3 by 3 block of tiles centered on any given tile:

First we have a helper function that returns the coordinates of all the tiles we're going to look at. For example, if you pass it [22 30] it will return:

Note that get-block doesn't do any bounds checking, so passing it [0 0] will happily return coordinates like [-1 -1], which are off the edge of the map.

This isn't a problem because our get-tile method will return :bound tiles for those coordinates, which are not :floor tiles and so are effectively walls for the purposes of this algorithm.

get-block itself is just a glue function that gets coordinates from block-coords and maps get-tile over them.

So now I have a way to get a sequence of all the tiles in a block centered around a target. The last step is actually figuring out what the resulting block for that target should be:

This looks long, but that's mostly because I like using named intermediate variables to make it more readable. It should be pretty easy to understand, just go ahead and read through it.

So now the smooth-world function has all the machinery it needs to smooth a world. The last step is to actually use it. I changed the random-world function to look like this:

At the moment it takes the zeroth iteration, which actually means the unsmoothed world. What gives?

I wasn't sure right away how much smoothing would look good, so I wanted to try out a bunch of levels and see how they behaved. I could have done it by printing to the console, but it's a pain to compare the multiple hunks of text.

I decided to just add it to the game itself for now to make it easy to see how the smoothing behaves. Back in core.clj I pulled in the smooth-world function:

Next I added another command to the :play UI: pressing s will smooth the current world by one more level:

Yes, it only took one line to add that. I simply replace the world with the smooth(er) world and return the resulting game. I don't need to touch the UI stack because I want to remain at the play UI for subsequent commands.

Once you fire up the game and press a key to begin, you're presented with the white-noise map from the last entry: 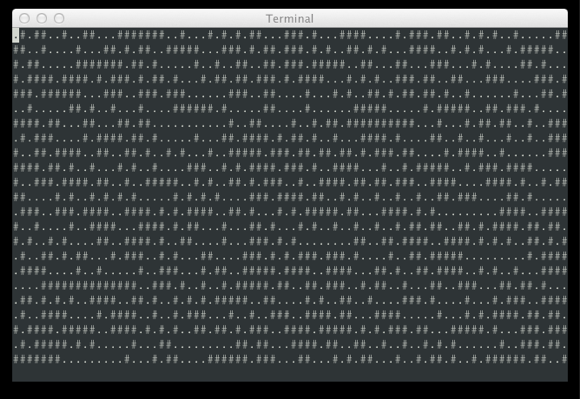 But now you can press s and the caves will smooth out a bit: 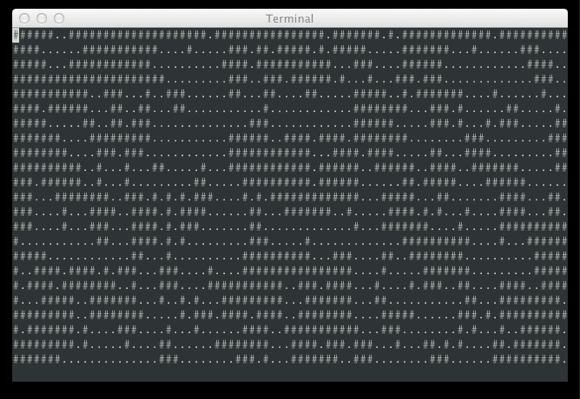 Another press of s smooths them further: 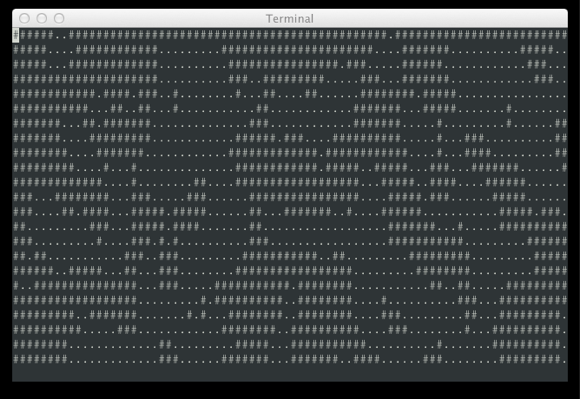 You can use enter or backspace to win or lose, then any key to go back to the start screen and get a new world to play with.

Screenshots really don't do this justice, because seeing the world change before your eyes is really cool. I made a 30-second screencast that demonstrates the effect if you don't want to actually run it locally.

I still haven't decided exactly how smooth I want to make the caves, so I'll leave that 0 in the nth call for now and figure it out later.

You can view the code on GitHub if you want to see it all at once.