The Caves of Clojure: Interlude 1

This entry is an interlude after post five in Trystan's tutorial.

If you want to follow along, the code for the series is on Bitbucket and on GitHub. Update to the interlude-1 tag to see the code as it stands after this post.

At the end of the last post I said that this one would be about refactoring and a macro, so that's what it's going to be.

I don't want to bore you with lots of long chunks of refactored code, so I'll just outline the changes and if you want to see what happened you can look in the repo on GitHub.

I ran Kibit over the code and fixed what it complained.

jdmarble on GitHub pointed out a place where I was using update-in and could simplify it to assoc-in. This is the kind of thing Kibit should catch, so I added it in and sent a pull request.

jmgimeno on GitHub pointed out that I could use an atom for the entity ID generation instead of a ref. That cleaned up a few lines nicely.

I updated the game loop and moved the call to draw-game so it doesn't get draw more times than is necessary.

I added a bunch of comments and docstrings throughout the code.

I added a few functions to the latest release of clojure-lanterna that allowed me to clean up the UI drawing code. I was able to completely remove the clear-screen function, and replaced the hardcoded screen size with a dymanic lookup.

I also changed how the actual screen gets drawn. Look in the repo for the full details — I think it's much nicer now (though I'm still not 100% happy).

I think that's about it. On to the meat of this post.

Right now, the entity system in the Caves works like this:

This is all vanilla Clojure, and up until now it's been fine because there was no crossover between the Lichen aspects and the Player aspects. But what's going to happen when I create a creature that shares behavior with one or both of them?

To see the problem, I'm going to create a Bunny entity that will hop around the screen, and can also be destroyed (assuming the player is a terrible, terrible person). So I'll create entities/bunny.clj:

We'll worry about tick soon, but so far, so good. Now I need to let bunnies move around:

Hmm, where have we seen this code before?

It's an almost exact copy of the Player's implementation of the Mobile protocol!

When you think about it, this makes sense. Most of the entities in the game will have the same implementation for most aspects. The flexibility of Clojure protocols means I have the power to customize behavior for every one of them, but it also means that I have to redefine the same behavior over and over.

There are a number of ways I could try to get around this duplication.

This would work, absolutely. It would isolate the generic functionality in one place successfully. But it means I'd have to manually type out the calls to those generic functions all the time. This is a Lisp — I can do better.

The next idea is to make Object implement every aspect (with the default implementations). This isn't ideal for two reasons.

First, it means that the type of an entity is no longer useful. If Object implements Mobile to provide the default functionality, it means every entity will effectively be Mobile even if it shouldn't be!

Second, it doesn't even give me everything I want. Observe:

In this example, the Foo object doesn't get the benefit of the default implementation because it implements the protocol itself. So when figuring out what world function to call Clojure asks "Hmm, does A implement Foo? Oh, it does? Okay, I'll use A's implementations then".

So the entities would either have to implement all of the aspect functions (resulting in the duplication of the ones they don't need to change) or none of them (which would give them the defaults).

So this isn't ideal. I could also have used multimethods here, because they do support default implementations. But multimethods don't give me a nice way to group related functions together like protocols.

Protocols also interact with the type system to give me handy functionality like:

The concept of "bunnies are destructible" is a useful one, and I'd lose it if I used multimethods.

Macros are not something you should reach for right away. They're tricky and much harder to understand than a normal function. But when all else fails, they're there as a last resort.

I couldn't figure out a way to do this without macros, so it's time to roll up my sleeves and work some dark Lispy magic to get a nice syntax.

When I'm writing a macro, my first step is usually to start at the end by writing out what I want its ultimate usage to be. For this functionality I'm actually going to need a pair of macros.

First, defaspect will replace defprotocol and allow me to define a protocol and provide the default implementations:

Those implementations are generic enough (moving moves an entity from their current space into an empty one) that many entities will probably be able to use them unchanged.

I'll also need a macro to replace extend-type. I decided to call it add-aspect:

In this example the EarthElemental entity is implementing Mobile. It will use the default move implementation (which just changes its location), but it overrides can-move?. Earth elementals can't walk through other entities, but they can walk through the rock walls of the Caves.

So I've got my examples of usage, now it's time to implement the macros. I'll start with defaspect.

My second step when writing a macro is writing out what the usage should be expanded into. After a bit of thinking I came up with this:

This looks a bit complicated because of the method implementations, which aren't really important when writing the macro, so let's remove those:

That's a bit easier to read. The defaspect macro is going to take all the forms I give it and expand into a do form with two actions: defining the protocol as before, and attaching a map to the Protocol itself with Clojure's metadata feature.

This map will contain the default implementations. For now just trust me that I'm going to need them in a map later.

Now to write the actual macro! It'll go in entities/core.clj for the moment. I'll start with a skeleton:

If you've used macros before, this should be pretty easy to read. I've pulled as much functionality as possible into two helper functions. Let's look at those:

Hopefully the docstrings will make them pretty clear. If you have questions let me know (or play around with them in a REPL to see how they behave).

And with that, defaspect is complete! I now have a way to define a protocol and attach some default implementations to it in one easy, beautiful call.

The other macro, add-aspect, is a piece of cake now that I've got the helper functions:

The important thing in understanding this macro is extend. extend is what extend-type and extend-protocol sugar over. It takes a type, a protocol, and a map of the implementations of that protocol's functions.

The key word there is "map", which really does mean a plain old Clojure map. So this macro will expand like so:

The (:defaults (meta Mobile)) simply retrieves the function mapping that defaspect attached to the Protocol, so in effect I get something like:

merge is just the vanilla Clojure merge function, so the resulting map will have the default implementations overridden by any custom ones given.

And that's it! Let's see it in action.

First I need to update the aspects to use defaspect and include their default implementations. Here's Destructible:

The code is just torn out of the Lichen code. Since this is how lichens will act, I can update them to use add-aspect:

Perfect. I then updated Mobile to use the defaspect macro. Look in the repository if you want to see that. Now players and bunnies can both use the same default implementations for movement:

Beautiful. I then converted the remaining aspects and implementations to use these macros.

Let's add some bunnies to the world. First I'll need a make-bunny function similar to make-lichen:

I don't know why I picked yellow. Are there yellow bunnies? There are in this world. I used a v as the glyph because it kind of looks like bunny ears.

Bunnies will be a bit rarer than lichens for the moment (and maybe in the future they could eat them). 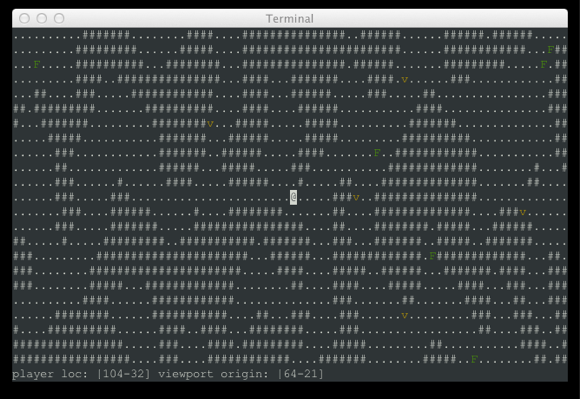 Bunnies! They're populated into the world and the player can kill them because they're Destructible.

Right now they can move, but choose not to. I'll fix that by updating their tick function:

Now they'll move whenever they're not backed into a corner. Obviously move complicated AI is possible, but this is fine for now.

So this is all good, but I haven't even used the "override one function of an aspect but not others" part of my fancy macro. I'll add another creature to show that off:

Oh no! The horrible silverfish from Minecraft! They wormy little guys are Mobile and Destructible, but they can move through walls with their custom can-move? function.

Notice how I didn't have to provide an implementation of move. Silverfish move like any other mobile entity (just by updating their location), the only thing special is where they can go.

After adding them to the world population, we can see a few wriggling their way though the walls in the northeast corner: 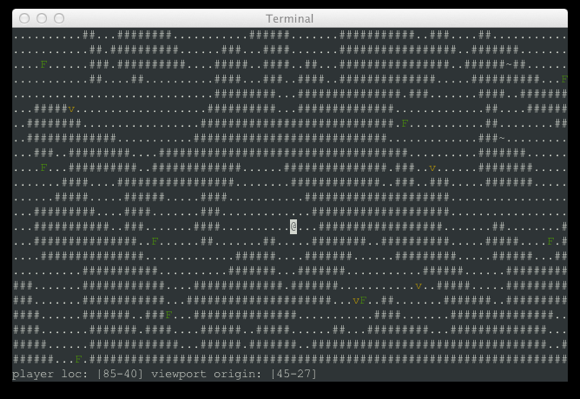 These two macros allowed me to add a new mob, with custom movement, in about 13 lines of code (excluding imports). That's pretty nice! They certainly aren't perfect though.

For one, every aspect has to define default implementations for its methods. You can't force all entities to implement it. This isn't a big deal for now, but I may want to add it in later.

Second, it doesn't handle docstrings properly. Again, not a huge problem at the moment but something to put on the todo list for later.

Finally, defining the protocol and implementations in the same form may lead to some tricky circular import issues. I can always split them into separate files in the future though.

That about wraps it up. If you have any questions or comments let me know! In the next entry I'll get back to Trystan's tutorial.