The Caves of Clojure: Part 7.1

This entry corresponds to the beginning of post seven in Trystan's tutorial.

If you want to follow along, the code for the series is on Bitbucket and on GitHub. Update to the entry-07-1 tag to see the code as it stands after this post.

It's been a while since the last post, but I've been taking care of things and hopefully should be able to write a bit more now.

This post is going to be short. It'll cover a relatively self-contained but interesting bit of Trystan's seventh post. The rest of it will be covered in the next entry.

In Trystan's seventh post he adds vertical levels and stairs connecting them. I'm going to cover the first part of that now: mapping out regions.

There's been a bit of refactoring since my last post which I'm not going to cover. If you want to see what changed, diff the tags in your VCS of choice.

In order to decide where to place stairs, Trystan maps out "regions" of contiguous, walkable tiles after he generates and smooths the world. I'm going to do the same thing.

My goal is to create a "region map", which is a map of coordinates to region numbers. For example, consider the following tiny world map:

There are three distinct regions in this map:

This makes it easy to tell which region a particular tile is in (if any).

As usual, I'll start with a few helper functions. These two functions are just for convenience and readability:

The all-coords function simply returns a lazy sequence of [x y] coordinates representing every coordinate in a level.

get-tile-from-level encapsulates the act of pulling out a tile from a level given an [x y] coordinate. This is helpful because of the way I'm storing tiles (note the ugly [y x]).

Next up is a function that filters a set of coordinates to only contain those that are actually walkable in the given level (i.e.: those that don't contain a wall tile):

Next is a function to take a coordinate and return which of its neighboring coordinates are walkable:

This one is almost trivial, but I like building up functions in small steps like this because it's easier for me to read.

Now we come to a function with a bit more meat. This is the core of the "flood fill" algorithm I'm going to use to fill in the region map.

In a nutshell, this function loops over two sets: walked and to-walk.

Each iteration it grabs a coordinate from to-walk and sticks it into the walked set. It then finds all the coordinates it can walk to from that coordinate using a helper function. It uses clojure.set/difference to determine which of those are new (i.e.: still need to be walked) and sticks them into the to-walk set. Then it recurs.

The code for this is surprisingly simple and easy to read. It's mostly just shuffling things between sets. Eventually the to-walk set will be empty and walked will contain all the coordinates that we want.

Finally comes the function to create the region map for an entire level:

This function also uses Clojure sets to its advantage. Once again, I loop over a couple of variables.

remaining is a set containing all the coordinates whose regions has not yet been determined.

Each iteration it pulls off one of the remaining coordinates. Note that I'm using first to do this. remaining is a set, which is unordered, so first effectively could return any element in the set. For this loop that doesn't matter, but it's important to be aware of if you're going to use the same strategy.

After pulling off a coordinate, it finds all coordinates walkable from that coordinate with the walkable-from flood-fill function. It removes all of those from the remaining set, shoves them into the region map, and increments the region number before recurring.

I'm going to save the rest of Trystan's seventh post for another entry, but since this one ended up pretty short I'm also going to go over visualizing the region map I've just created.

First I need to generate the region map when I create the world, and attach it to the world itself so we can access it from other places:

The last line in the let is where it gets generated. It's pretty straightforward.

I'd like to be able to toggle the visualization of regions off and on, so I'm going to introduce a new concept to the game: "debug flags".

I updated the Game record to include a slot for these flags:

I then updated the new-game function to initialize them (currently there's only one) to default values:

The user needs a way to toggle them. For now I'll just bind it to a key. In the future I could make a debug UI with a nice menu.

Now when the user presses R (Shift and R) it will toggle the state of the :show-regions debug flag in the game.

All that's left is to actually draw the regions somehow. First, we only want to do this if :show-regions is true. I edited the :play UI's drawing function to do this:

The marked lines are the only new ones. I'm going to draw regions after/above the world tiles (so they'll show up at all) but before/below the entities (so we can still see what's going on).

Drawing the regions is fairly simple, if a bit tedious:

For now, bad things will happen if we have more than 62 regions in a single level. In practice I usually end up with about 20 to 30, so it's not a big deal.

To sum up this function: it iterates through every coordinate in the level that's displayed in the viewport, looks up its region number in the region map, and draws the appropriate letter if it has a region number.

Now that I've got a way to visualize regions it becomes much easier to check whether they're getting set correctly. Here's an example of what it looks like when you toggle :show-regions with R: 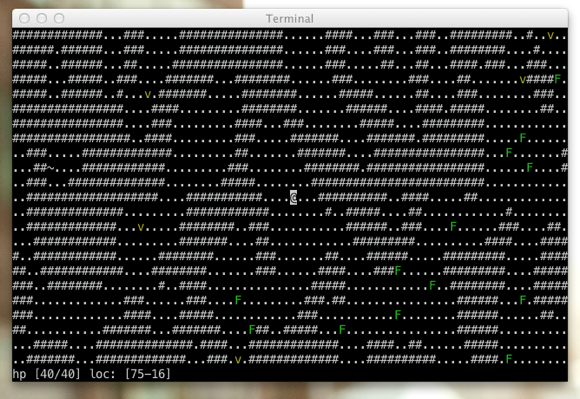 As you can see, the small, closed off areas have their own numbers, while the larger regions sprawl across the map.

The next article will finish Trystan's seventh post by adding multiple z-levels to the caves.