In late October the video game streaming site Twitch.tv launched "Twitch Creative", essentially giving people permission to stream non-video game related creative content on the site. To celebrate the launch they streamed all 403 episodes of The Joy of Painting with Bob Ross in a giant marathon.

The Bob Ross channel has its own chat room, and it quickly became packed with folks watching Bob paint. The chat spawned its own memes and conventions within days, mostly taking gamer slang (e.g. "gg" for "good game") and applying it to the show (people spam "gg" in the chat whenever Bob finishes a painting).

Sadly that marathon has ended, but they've kept the dream alive by having "Bob Ross Night" on Mondays. Every Monday they're going to stream a season of the show twice (once at a Europe-friendly time and again for American folks). Last Monday I scraped the Twitch chat during the marathon(s) of Season 2 and decided to have some fun poking around at the data.

Scraping the chat was pretty easy. Twitch has an IRC gateway for chats, so I just ran an IRC client (weechat) on a VPS and had it log the channel like any other. Once the marathon finished I just scp'ed down the 8mb log and started working with it.

Then I cleaned it up to remove some of the cruft (status messages from the client and such) and lowercase everything:

Then I made an ugly little Python script to massage the data into something a bit easier to work with later:

This results in a file with one message per line, in the format:

On a side note: I tried out Mosh for persisting a connection to the server (instead of using tmux or screen to persist a session) and it worked pretty well. I might start using it more often.

Now that we've got a nice clean corpus, let's start playing with it!

The obvious first question: how many messages did people send in total?

That's almost 10,000 messages per hour! And since there were periods of almost no activity before, between, and after the two marathons it means the rate during them was well over that!

Who talked the most?

Some talkative folks (though honestly I expected a bit higher numbers here). cuts is "cut on spaces" — a little function I use so I don't have to type -d ' ' all the time.

The chat has spawned a bunch of its own memes and jargon. I made another ugly Python script to split up messages into n-grams so we can analyze them more easily:

This lets us easily split a message into unigrams:

The order of n-grams within a message isn't preserved because the splitting script uses a set to remove duplicate n-grams. I wanted to remove dupes because it turns out people frequently copy and paste the same word many times in a single message and I didn't want that to throw off the numbers.

Bigrams are just as easy — just change the parameter to split.py:

N-grams are joined with double underscores to make them easier to plot later.

So what are the most frequent unigrams?

The chat loves to spam "RUINED" whenever Bob makes a drastic change to the painting that looks awful at first, and then spam "SAVED" once he applies a bit more paint and it looks beautiful. This happens frequently with mountains.

"KappaRoss" and "BibleThump" are Twitch emotes that produce small images in the chat.

When Bob cleans his brush he beats it against the leg of the easel to remove the paint thinner, and he often smiles and says "just beat the devil out of it". It didn't take long before chat started spamming "RIP DEVIL" every time he cleans the brush.

How about the most frequent bigrams and trigrams?

Looks like lots of love for Bob and no sympathy for the devil. It also seems like Van Dyke Brown is Twitch chat's favorite color by a landslide.

Note that the exact n-grams depend on the tokenization method. I used NLTK's word_tokenize because it was easy and worked pretty well. wordpunct_tokenize also works, but it splits up basic punctuation a bit too much for my liking (e.g. it turns bob's into three tokens bob, ', and s, where word_tokenize produces just bob and 's).

Pure numbers are interesting, but can be misleading. Let's make some graphs to get a sense of what the data feels like. I'm using gnuplot to make the graphs.

What does the overall volume look like? We'll use minute-wide buckets in the x axis to make the graph a bit easier to read. 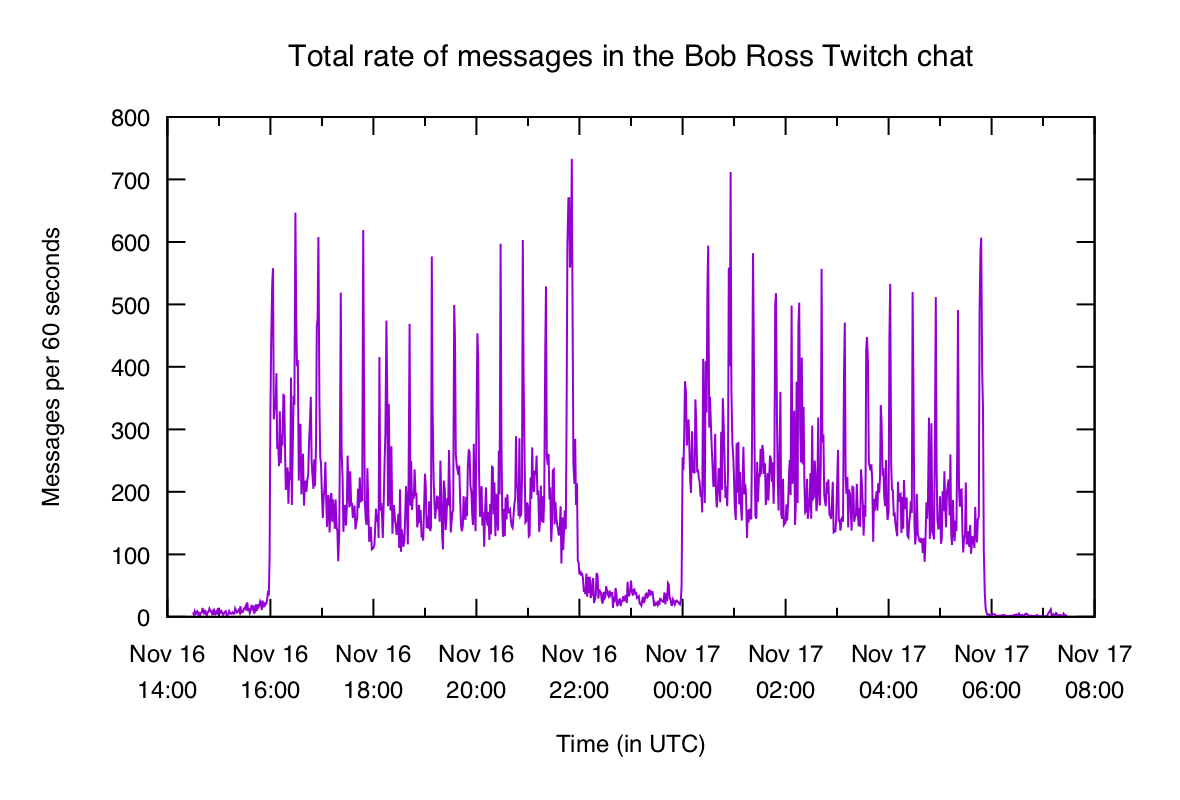 Can you tell where the two marathons start and end?

Let's try to identify where episodes start and finish. Chat usually spams "hi bob" when an episode starts and "gg" when it finishes, so let's plot those. We'll use 30-second x buckets here because a minute isn't a fine enough resolution for the events we're looking for. To make it easier to read we'll just look at the first half of the first marathon. 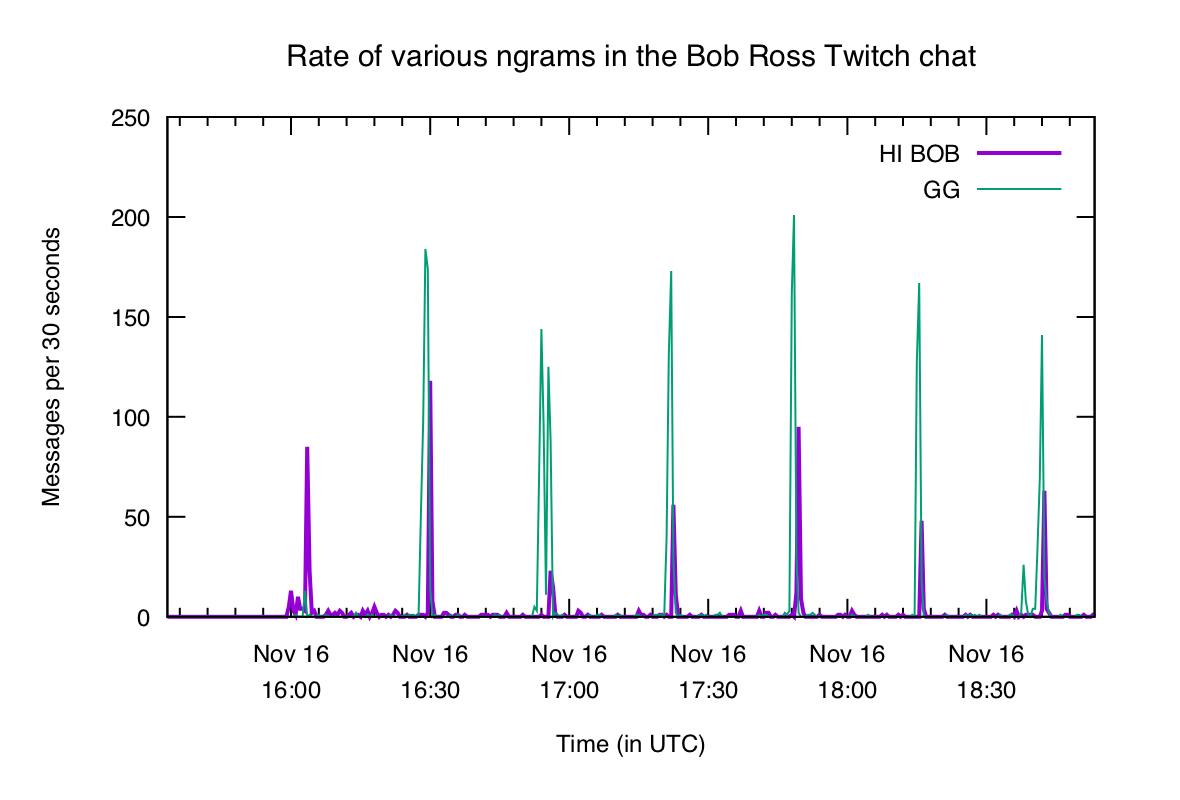 This works pretty well! The graph starts with a big spike of "hi bob", then as each episode finishes we see a (huge) spike of "gg", followed immediately by a round of "hi bob" as the next episode starts.

Can we find all the times Bob cleaned his brush? 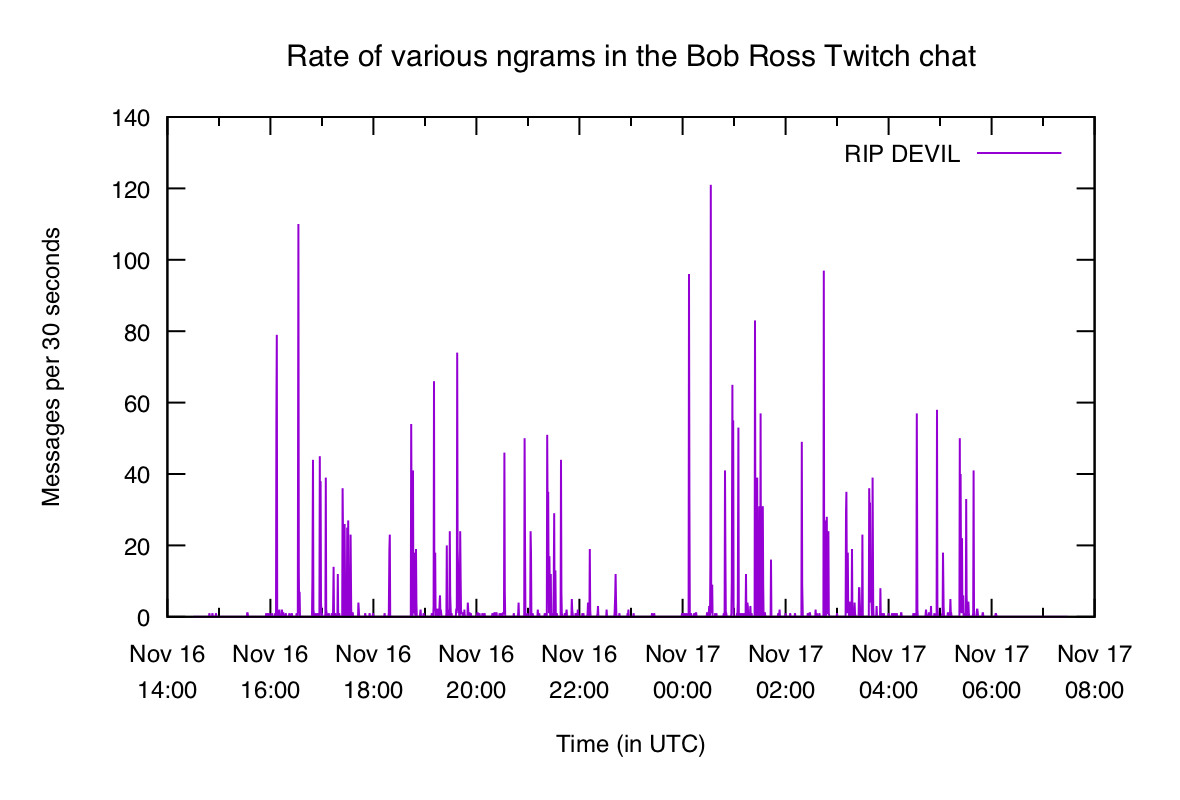 Looks like the devil isn't having a very good time. It's encouraging that the two seasons have roughly the same structure (three main clusters of peaks).

When did Bob get the most love? We'll use 5-minute x bins here because we just want a general idea. 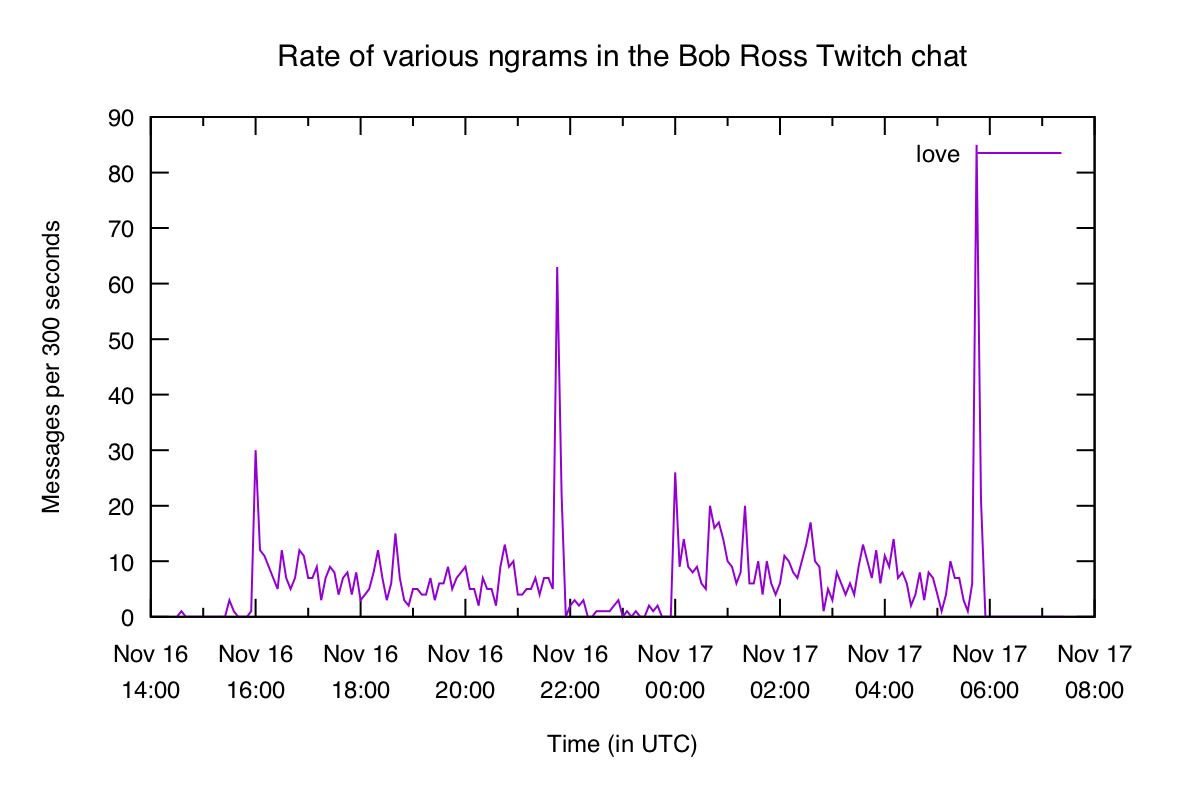 Lots of love all around, but especially as he signed off at the end.

One of my favorite moments was when Bob said something about "changing your mind in mid stream" and the chat started spamming conspiracy theories about how he somehow knew about the stream 30 years in the past: 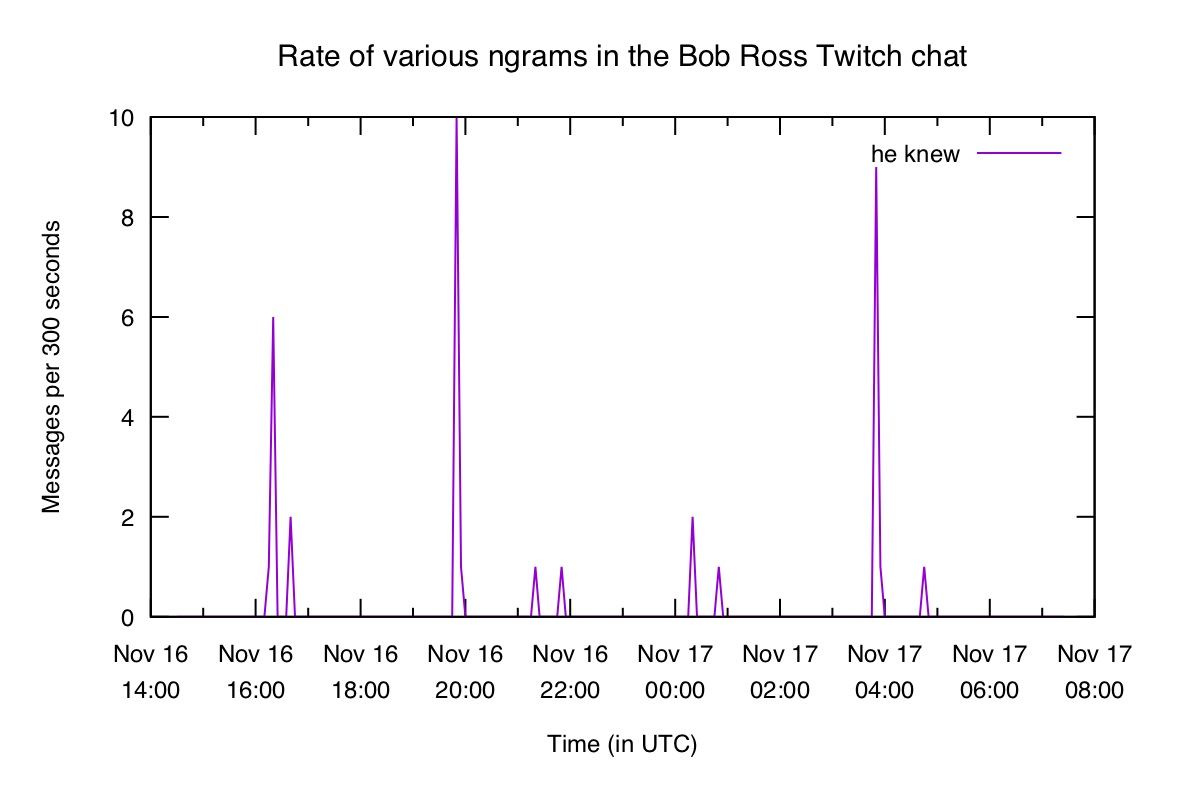 Poking around at this chat corpus was a lot of fun (and definitely counts as studying for my NLP final, definitely). I'll probably record the chat during next week's marathon and do some more poking, specifically around finding unique events (e.g. his son Steve coming on the show) by comparing rate percentiles.

If you've got other ideas for things I should graph, let me know.