This entry is the third in my series describing various Mercurial workflows. The first describes the simplest one: branching only when necessary, and the second describes the classic "default and stable" workflow.

I've been experimenting with another workflow lately and it's proven itself to be pretty useful, so I wanted to write about it.

I created the hgtip.com site a while back as a resource for all those tiny little tips that make working with Mercurial easier. People seemed to like it and eventually there was some interest in translating the site to other languages.

The site itself is a collection of flat files that are run through Hyde to generate a set of static HTML pages. The content of the site is held in a subrepo which people can clone to contribute without worrying about the site's structure.

When coming up with a strategy for managing translations I had the following requirements:

After thinking about the problem for a while I settled on using Mercurial's named branches to manage translations.

For the content of hgtip I (currently) have three branches: default, ja, and de.

default contains the English version of the tips, while ja and de contain the Japanese and German translations.

As other people translate the existing tips they commit to the appropriate branch. When I publish the site to the server I can easily update to each branch to render the content, one at a time.

When a translator is ready to translate any new tips, they can run hg log -b THEIRBRANCH to see what's been merged into the branch and find the tips they need to translate.

Here's a diagram to help explain what's going on. As new tips are added they get merged into the translation branches. When a translator has time to translate a tip, they commit to their branch. 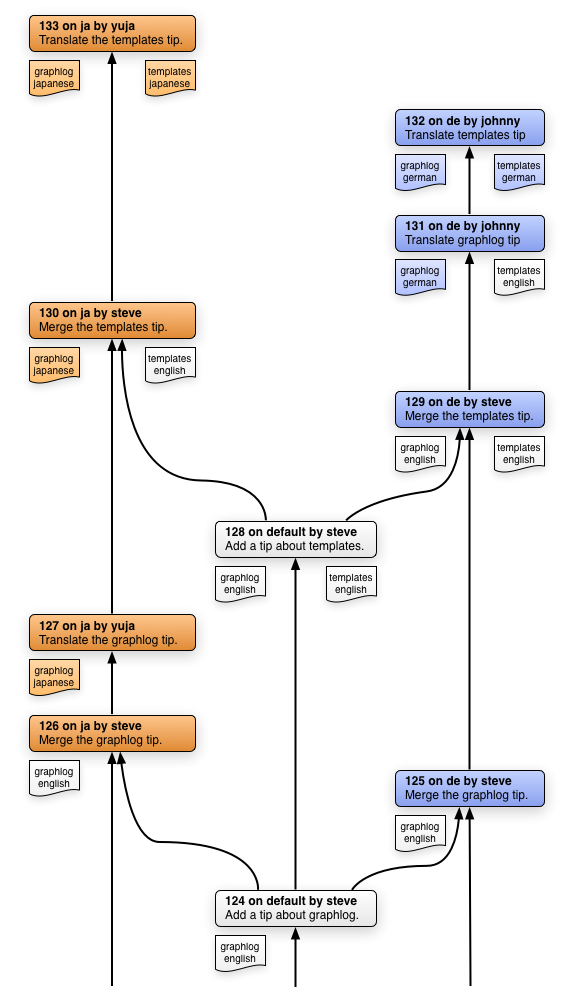 There's one small issue that arises with a workflow like this, and it happens when I fix a typo (or add an update) in an existing tip.

If I fix a typo in beginner/sometip.html, it will cause a merge conflict when someone tries to merge it into a translation branch. This is generally a good thing because it shows the translator where the change was. They can then fix the conflict by changing the translation, commit, and everything works.

To avoid this I always make sure that lines are hard-wrapped with linebreaks. You can do this easily by pressing Ctrl-Q in TextMate or using gqip in vim. I'm sure Emacs has an equivalent as well.

This doesn't affect the output because hgtip uses Markdown and Markdown ignores single linebreaks. If you're using another markup language this might be a bigger problem for you than it is for me.

A Work in Progress

This is the first time I've ever used this branching structure and I haven't hear about other people using it. I'm sure there are some tricks that might make things smoother, so if you have any advice I'd love to hear it!