In the previous post we looked at how to emulate a CHIP-8 CPU with Common Lisp. But a CPU alone isn't much fun to play, so in this post we'll add a screen to the emulator with Qt.

The full series of posts so far:

The full emulator source is on BitBucket and GitHub.

Qtools is a library that wraps up a few other libraries to make it easier to write Qt interfaces with Common Lisp. It's a big library so I'm not going to try to explain everything about it here. Most of the code here should be pretty easy to follow even if you haven't used it before (I'll explain the high-level concepts), but if you're interested in exactly how some code works you should check out its documentation.

Let's take a moment to look at the overall architecture of the project. So far we've got a chip struct that holds the state of the emulated system, and a bunch of op-... instruction functions that emulate the instructions. We could start plugging in drawing calls right in the appropriate instructions, and this is the approach a lot of emulators take. But I'd like to separate things a bit more strictly.

My goal is to keep the emulated system entirely self-contained, and then layer the screen and user interface on top. The emulator should ideally know nothing about the existence of an interface. This keeps the emulator simple and (mostly) free of cruft. It will also let us play around with alternate interfaces if we want to — I think it might be fun to add an ASCII screen with ncurses and cl-charms some day!

With that said, we will make a few concessions to performance along the way.

We'll start with the emulation side of things.

The CHIP-8 has a 64x32 pixel display, and each pixel has only two colors: on and off. It's about as simple a screen as you can get.

There are other ways we could have separated things, but let's run with this strategy for now.

We'll add a video memory array to our chip struct:

Here we already see a first concession to performance. We could have used a multidimensional array to make the indexing a bit nicer, but by using a simple flat array we'll be able to pass it directly to OpenGL later.

OpenGL is going to want this array to be in "X-major" order, so the array will need to look like:

We'll add a couple of helper functions to make the indexing of this array a bit less painful:

We'll add one more field to chip before moving on, a "dirty" flag:

This will make it easier for any interface to determine whether it needs to update the display or not.

The CHIP-8 spec sets aside a portion of main memory starting at address #x50 to contain sprites for the hex digits 0 through F. Check out the display chapter of Cowgod's guide for an overview of how the CHIP-8 defines sprites.

We'll need to load these sprites into our emulator's memory at the correct location when resetting it. We'll also clear out the video memory while we're at it:

Now we can start implementing the graphics-related instructions. The first is the very simple CLS to clear the screen:

The most complicated part of the emulator's code is certainly the portion that draws sprites. The instruction itself will delegate to a helper function:

Check out Cowgod's guide for a good overview of how the CHIP-8 drawing system works. I'll assume you've read that before moving on.

Let's implement the draw-sprite function in chunks, because it can be a bit intimidating if I just slap it all down at once. Before we start drawing anything we reset flag to 0, and we'll mark the dirty flag at the end:

Simple enough. Now we need to loop through each row of the sprite and draw it. The address of the sprite we're drawing is given by the index register, and each row in the sprite is represented by a byte of memory. Again, check out Cowgod's guide for the full details.

To draw a row, we just have to draw each of the eight pixels in it:

Unfortunately we hit a snag at this point. All the references I've found say that if any X or Y values go outside of the range of valid screen coordinates the sprite should wrap around the screen. And indeed, some ROMs (e.g. ufo.rom) require this behavior to work properly. But unfortunately some other ROMs (e.g. blitz.rom) expect the screen to clip, not wrap!

This is the first case where our emulator will need to bend the rules of the spec to accommodate buggy ROMs. Sadly this is not uncommon in the emulation world.

We'll deal with this by adding a setting to the emulator:

Then we can hide the "to wrap, or not to wrap" logic in its own helper:

in-range-p is a predicate from my utility library that checks if low <= val < high (which is often useful).

Now we can use this in draw-sprite to determine whether and where to draw each pixel:

Now we come to the second concession to performance. Ideally we'd store the pixel values as t and nil or 1 and 0. But due to a bug in Qt 4 (which we'll talk about later) we need to store 255 and 0. So we need to do a bit of an ugly dance to XOR the pixels together:

xor is the exclusive-or variant of and/or from Alexandria.

And we're finally done. draw-sprite is 22 lines, which is getting a bit long by Lisp standards, so it might be worth breaking into separate functions. But it's also the most performance-critical function in the emulator, so keeping it as a single loop will let us optimize it heavily later if necessary (spoiler: it won't be necessary).

That's it for the emulation side of things. If we run a ROM now the video memory array in the chip struct will be updated properly. But unless we want to look at raw memory, we need some kind of a screen.

We'll start off with a fresh package:

We're going to use OpenGL to draw the actual pixels for our screen. The basic plan will be:

We can use a tiny 64 by 64 texture so this will be fine for our performance needs.

The main UI for our screen will be a QGLWidget:

We'll define some initializers for this widget:

Single pixels are almost impossible to see on today's high-resolution displays, so we'll scale them up by 8 to make them bigger.

We'll use nearest-neighbor interpolation to get nice sharp sprites.

The texture array will be unsigned-bytes of luminance values, with 0 being black and 255 being white. This explains the dance we had to do back in the draw-sprite.

A better way to do this would be to have video memory contain 0 and 1, and use an OpenGL fragment shader to map these to the desired colors. Unfortunately due to a nasty bug in Qt 4 on OS X we can't use shaders, so we're stuck with this workaround for the time being. Computers are awful.

Now that we've got a widget we'll need to paint it on each frame. We'll use a Qtimer to handle firing off the paint events:

The timer widget will fire a Qt timeout signal sixty times per second. The screen's update slot is connected to this signal, and will either initiate a repaint or kill the screen, depending on whether the chip is still running.

The die function also tells the chip to stop running. This obviously isn't necessary here (we just checked that it's not running!), but we'll be using die in another place later.

(It's really a shame that Qt and Common Lisp both use the words "signal" and "slot" to mean wildly different things. It makes using Qt with Common Lisp more painful than it should be...)

Now on to the meat of the code, repainting. We'll define the paint-event and delegate to a helper function:

And here we go with another pile of verbose graphics code:

Each frame, if video-dirty is set we'll update the texture with the contents of the chip's video memory. Then we draw a quad using this texture to get the pixels on the actual display.

Note that we're only every using the top half of the texture — the screen is a 2:1 rectangle but OpenGL likes square textures.

Getting the texture coordinates on the quad's vertices correct is important, otherwise you'll end up drawing whatever garbage happened to be in memory at the time which, while entertaining, is probably not what you want.

The last thing we need is a function to actually create the GUI:

And now we can modify our emulator's run function to start up a GUI in addition to the system emulation:

Qt will take control of the thread and block when run, so we'll need to run our CPU emulation in a separate thread.

The only thing they both write to is the video-dirty flag, so there's not much synchronization to deal with (yet). It's theoretically possible that a badly timed repaint could draw a half-finished sprite on the screen, but in practice it's not noticeable.

A different architecture (e.g. passing down pixel-drawing functions into the emulator from the UI) could solve that problem while keeping the layer separate, but it didn't seem worth the extra effort for this little toy project.

And with all that done we've finally got a screen to play games on! 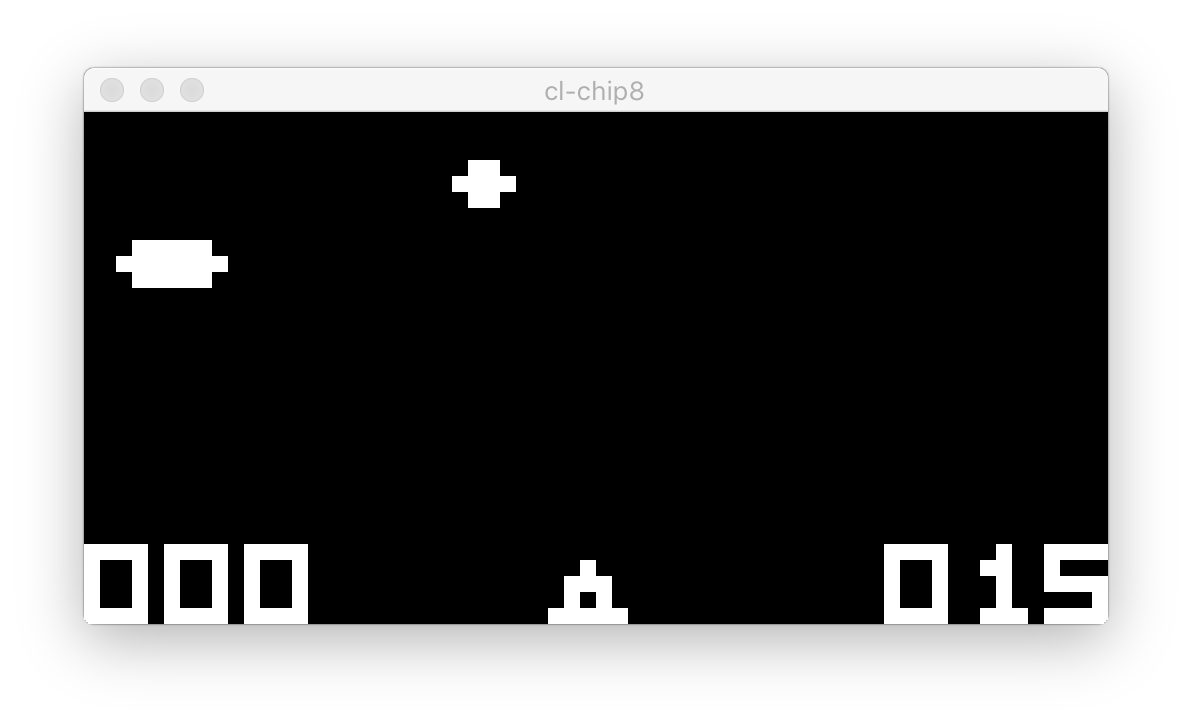 That's all for the graphics. In the next post we'll add user input, and then later we'll look at sound and debugging.